Reading provenance from ubiquitous quartz: understanding the changes occurring in its lattice defects in its journey in time and space by physical methods – PROGRESS ERC COG 101043356

Quantitative provenance analysis studies are instrumental in understanding the tectonic and climatic processes that are shaping Earth`s landscape. Although the most abundant mineral in the sedimentary system is quartz, almost all studies in provenance analysis investigate accessory minerals. Quartz crystals contain a vast number of point defects, intrinsic or due to impurities. Although our understanding on the formation and dynamics of these defects is far from complete, a few of these defects in quartz are used for dating Quaternary sediments by luminescence (thermoluminescence (TL) or optically stimulated luminescence (OSL)) or by electron spin resonance (ESR).  PROGRESS aims at proving that point defects in quartz have also the capacity to carry genetic information and their modifications can provide evidence for antiquity, metamorphism (or lack thereof) as well as knowledge on weathering, transport, or recycling. This information can be unravelled by ESR and luminescence methods in combination with microscopic techniques such as scanning electron microscopy coupled with cathodoluminescence (CL) wavelength resolved spectroscopy. To understand changes that are occurring at atomic level in quartz in nature in geological time, PROGRESS will investigate quartz grains extracted from independently dated old to young quartz-bearing continental crustal sources, metamorphosed rocks versus their unmetamorphosed equivalents, fresh versus highly weathered samples, as well as intrusive versus volcanic rocks, besides conducting experiments in laboratory environments. To tackle nature`s complexity during sediment movement in space and time the effect of physical and chemical changes that occur during transport of quartz grains will be investigated by the study of river sediments that drain different lithologies. These investigations will allow a simple quartz based fingerprinting method to be developed, that will have a significant impact on quantitative provenance studies.

In PROGRESS, we aim at understanding the changes occurring at atomic level in quartz in the rock cycle with the goal of defining a new provenance method. A new quartz-based method has the potential to bring a breakthrough in quantitative provenance analysis as quartz has net superiority in terms of abundance and source rock fertility in sedimentary systems, compared to accessory minerals such as zircon and apatite used by state-of-the-art methods. We will do this by an integrated novel application of luminescence, electron spin resonance, and scanning electron microscopy hyperspectral cathodoluminescence methods. Conceptually, we will rely on point defects. In quartz, if one considers a grain of sand there will be about 10^12 defects, intrinsic, such as oxygen vacancies, or extrinsic due to impurities such as Al or Ti. Some of these defects have the capacity to record time as they trap charge as a result of the interaction of natural radioactivity with the crystal. In the rock cycle some of this charge can be detrapped when exposure to light or heat occurs. PROGRESS will prove that point defects in quartz have the capacity to be used as a provenance tool. 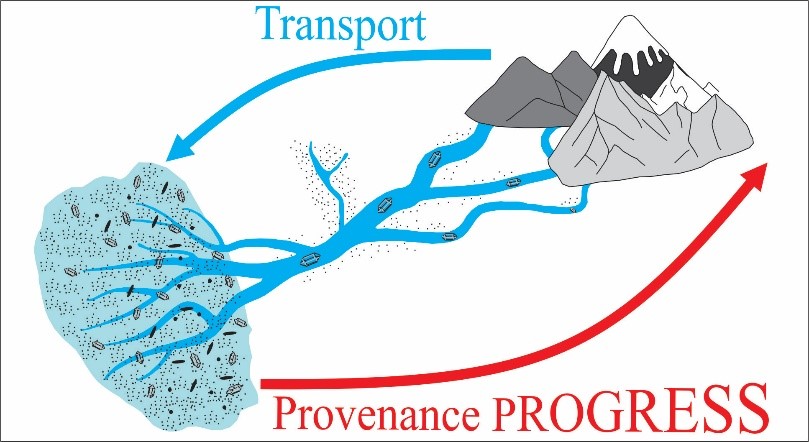 For fingerprinting the signals used should match the corresponding signals of host rocks and should remain unchanged in time and during transport as you can see in test on the effect of irradiation on E`, an oxygen vacancy quantified by electron spin resonance. The real game changer though is exploiting the potential of defects in quartz for addressing transport and recycling. For that, we will be looking for signals with dynamic but predictable properties and we believe that defects that fulfil such criteria can be identified in quartz. PROGRESS will rely on laboratory experiments. We will go beyond the state of the art by a novel combination of methodologies. However, we believe that it is unlikely that laboratory experiments can fully reproduce the changes occurring on a long-term scale or in extreme conditions in nature. In order to do that, we will rely on samples that are well characterized and reflect the natural laboratory on a billion-year scale. In other words, PROGRESS will investigate the fundamental physical processes that are occurring in a cause-effect relationship dictated by the grand scheme of natural processes on a multiscale time approach, from Ga to Ka. Our work will provide a cross-disciplinary contribution to Earth sciences, bringing exciting new results and hence significant PROGRESS for the trapped charge dating community and resuling in a a novel provenance method.